I think Warren, Cinnamon's grandfather and the old beer brewer from my Christmas River series, would heartily approve of these delicious, gooey, and rich Pumpkin Ale Cupcakes! Just make sure to make the full recipe as they will disappear fast! 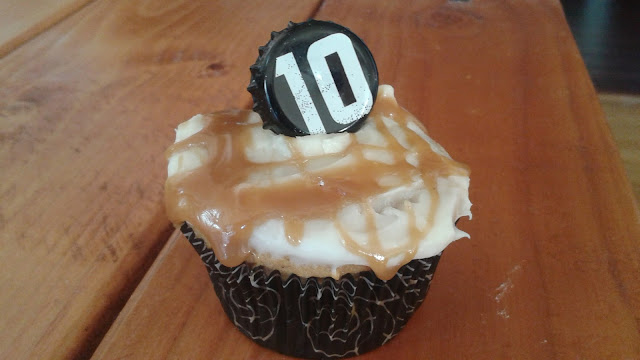 Preheat oven to 350 degrees and line muffin tins with paper cupcake liners. Sift together flour, baking soda, baking powder, salt, and spices in large bowl.
In separate large bowl, use an electric mixer to cream butter and brown sugar until fluffy. Add eggs one at time while mixing. When combined, add flour mixture in three batches, alternating with additions of heavy cream and half and half until all ingredients are combined. Add pumpkin, and beat until just combined.
Divide batter among lined muffin tins, filling about three-quarters of the way. Bake for 15 to 20 minutes until golden brown.

With an electric mixer, beat butter and cream cheese until fluffy. Add sugar, half a cup at a time, mixing until smooth. Add vanilla. Once cupcakes are cool, spread frosting onto cupcakes.

For the Pumpkin Ale Caramel:

8 ounces of Pumpkin Ale  (I used 10 Barrel Brewing Co.'s delicious Big Ol' Pumpkin Imperial Ale, but feel free to use whatever seasonal pumpkin beer you want to. Just make sure the IBU (bittering units) is below 30 or so.) 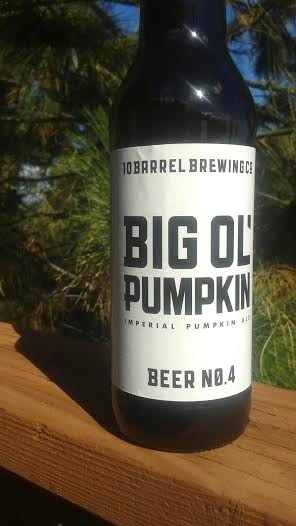 Heat the pumpkin ale in a medium saucepan and bring to low boil. Cook, uncovered, until reduced by about half.
Add the butter and brown sugar and cook, stirring occasionally, until mixture is thick and syrupy -- about 10 to 15 minutes. When it becomes this consistency, stir in the cream. Cook about five minutes more, until thickened. Remove from heat and add vanilla. Let it cool and thicken. Liberally drizzle caramel over frosted cupcakes.

Pair the finished cupcakes with a cup of hot coffee on a cold October morning and watch the leaves fall.

Posted by MegMuldoon at 2:22 PM