Much like Cinnamon Peters from The Christmas River series, I love just about every flavor and variety of pie under the sun. But if I had to choose just one flavor as my favorite, then I'd have to say there's nothing more magical than a slice of homemade, buttery-crusted, creamy apple pie in the fall.

My love for apple pie can be traced back to childhood. I don't remember my mom baking that many pies growing up (she baked plenty of other delicious things for us, but pie wasn't usually on the menu), so it was always such a special treat when she'd make her Sour Cream Apple Pie. She made it most years in either September or October, and I think that it was the start to my obsession with the dessert. To this day, I think this is my very favorite pie ever because of the fond memories I have of it. My mom still bakes this in the fall, and it's still always such a treat when she does!

The other day, I felt inspired and decided to use her recipe, which is based on a very excellent one in The Silver Palate Cookbook. I tweaked it a little here and there (whiskey was not in the original recipe!), and I think it turned out pretty tasty. Not as good as my mom's, but still pretty darn good! 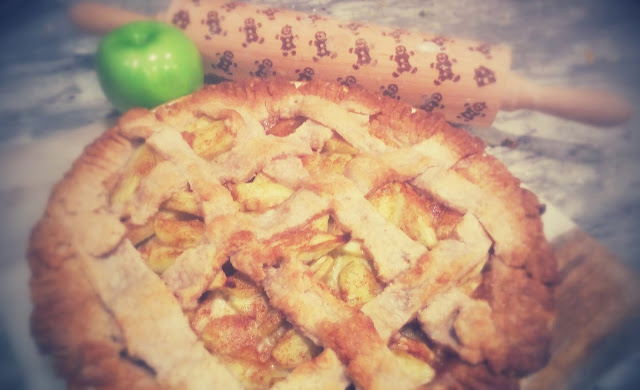 Combine flour, sugar, salt, and cinnamon in a large bowl. Cut in butter and shortening with a pastry cutter until the mixture becomes pebbly. Add apple cider to the mixture until the dough begins to stick together. Add more cider if necessary. Gather up into a ball, and wrap in plastic wrap. Let it chill in the fridge for at least two hours.

Bring the dough out from the fridge, and divide in half. Roll out one half of dough, and fit it into a pie dish. With a fork, place some breathing holes in the crust, then place the pie tin in the freezer for half an hour (freezing it before baking helps ensure that the crust will keep its shape!) Meanwhile, pre-heat the oven to 350 degrees. After half an hour, remove the pie dish from the freezer and bake for ten minutes. Remove from oven, then let cool. 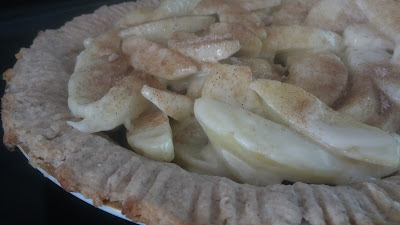 Peel and cut apples into eighths. Meanwhile, in a large sauce pan, melt the butter over medium heat. When the butter is melted and starts bubbling, add the apple slices. Saute for about 10 to 15 minutes over medium heat, making sure not to burn the apples. When ready, the apples should be a nice golden shade and should be slightly tender. Remove from heat, and let cool.

In a small bowl, combine all ingredients. Dust mixture evening over the apple filling before baking.

Roll out remaining half of crust dough, and cut even lattice strips from it. Weave them atop the pie filling. Bake the pie at 400 degrees for 10 minutes, then lower temperature to 350 degrees and bake for another 40 minutes or so. If the crust starts browning too much, cover with aluminum foil.

Let cool, then enjoy a slice with whipped cream, ice cream, or even a hunk of good-quality cheddar cheese. Sit back, and enjoy watching the leaves fall!
I hope you enjoy this tasty recipe. Wishing you a very happy October!