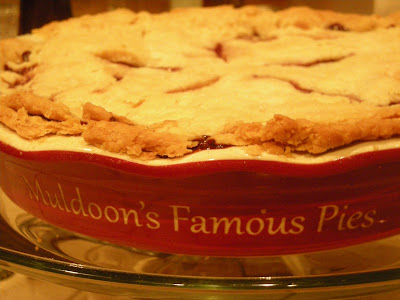 I got this awesome red pie dish from my sister for my birthday that has “Muldoon’s Famous Pies” engraved on the outside. It's just about the coolest thing ever, and it's given me just the excuse I needed to make more pie.

This past Tuesday, I came home from work and spent the evening making a peach blueberry pie, much like the one Cinnamon makes in Mayhem in Christmas River.  It was, well... a peach! I based the recipe on one in Bubby's Homemade Pies, a book that is quickly becoming my pie bible. I thought the blueberries in the recipe might have overpowered the peaches, but I used this technique of roasting the peaches before cutting them up that made their flavor just shine. They came out flavorful and delicious, and it was unlike any peach pie I've ever had. The pie ended up disappearing like nobody’s business. It was a huge success!

So, if you’ve got a free evening and you want to try out this recipe, I recommend putting on some good music, drinking a good bottle of beer, and enjoying the long, time-consuming process in its entirety. Believe me – it’s well-worth the effort. 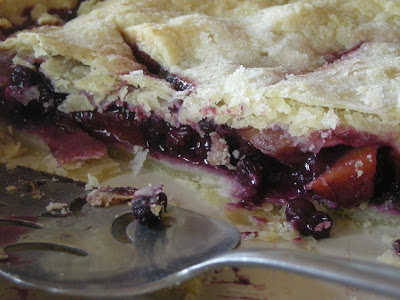 For the Crust:
3 cups flour
9 tablespoons cold butter
6 tablespoons vegetable shortening
½ teaspoon of salt (or more, if you like your crust a little saltier)
½ cup of cold water

Mix flour and salt together. Cut butter and vegetable shortening into small pieces, then add to flour mixture. Cut butter and shortening into flour with a pastry cutter until mixture is pebbly. Add water a little at a time until it forms a dough. Split dough into two and roll into balls. Place in freezer for half an hour.
Preheat oven to 375 degrees and roll out one of the dough halves into a disc. Place and form into pie dish. Cut off excess edges and poke crust several times with a fork. Place back in freezer for 10 minutes, then place dish in heated oven for 10 minutes to pre-bake.

For filling:
Preheat oven to 400 degrees
5 to 6 Peaches, roasted, skinned, and cut into sixths (see below for how to do this)
2 cups frozen blueberries
1 plus 1/2 tablespoons corn starch
¾ cup brown sugar
¼ cup of flour
Pinch of salt
Dash of cinnamon
Zest and juice from ½ a lemon
3 tablespoons butter
Sugar

Mix peaches, blueberries, corn starch, brown sugar, flour, salt, cinnamon, lemon zest and lemon juice until just mixed. Pour ingredients into pre-heated pie crust. Sprinkle with slices of butter, then roll out remaining dough into disk and place on top, crimping to fit around the edges. Dust top with sugar, then cut five vents into top crust.
Place on baking pan in oven and bake for 10 minutes. Lower temperature to 375 degrees, and bake for another 40 or so minutes, until top is golden, and the house smells like heaven.
Take out and let cool.

Roasting peaches:
Preheat oven to 375 degrees (This can be done when you’re pre-baking the pie crust)


Half peaches and place on baking pan. Coat with melted butter, sugar and a healthy helping of cinnamon. Bake for 15 minutes and then place in freezer to cool down. When cool enough, peel skins (should come right off) and remove pits. Cut into sixths, and add to pie filling.

I hope you enjoy this recipe as much as I did!