5 Things to Know About Ginger of the West

I’m so excited to announce that my latest project, Ginger of the West: A Witches of Broomfield Bay Mystery, will be out this Thursday! This book, which I’ve co-written with Amazon best-selling author Jools Sinclair, is a lighthearted mystery brimming with cozy magic. Since this is a new book and a new series, I thought it would be helpful to do my usual “5 things to know…” post for those who want to know more!

1. What is Ginger of the West about?

Ginger of the West: A Witches of Broomfield Bay Mystery is about a cafe owner named Ginger Westbrook who lives in a small town on the Oregon coast. It has paranormal elements in it, but it also has plenty of cozy elements, too. Here’s the official description: 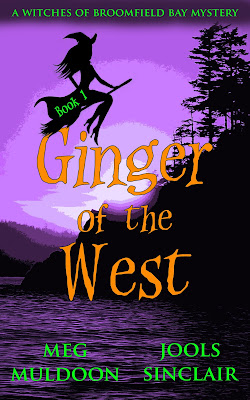 A dead mayor.
A wacky aunt.
An uppity millionaire romance author.
And a small town full of explosive secrets…
It’s one headache after another for witch and café owner Ginger Westbrook.
When Mayor Penelope Ashby rolls her car off a driveway and into the ocean, everyone in the small, sleepy seaside town of Broomfield Bay, Oregon is shocked.
Everyone but Ginger’s Aunt Vivian, who “saw” the grisly death coming long before the unlikable mayor plunged into the Pacific.
But when it’s discovered that the death may not have been an accident, accusations start flying and Ginger and Vivian find themselves smack dab in the middle of a modern-day witch hunt.
Strange things are afoot in Broomfield Bay this summer, and it will take all of Ginger’s powers – supernatural and otherwise – to keep the small town’s pitchforks and torches at bay.
Amazon best-selling authors Jools Sinclair and Meg Muldoon join forces in this magical tale. Full of mystery, romance, humor, and chowder, the first book in the Witches of Broomfield Bay Mysteries is this summer’s perfect cozy mystery beach read.

Jools Sinclair is a fellow indie author and I'm a huge fan of her best-selling paranormal mysteries, 44. We’ve been talking about co-writing a series about witches for years now, so it’s so exciting to see this work published! This book is a real collaboration -- we’ve both brought our best storytelling talents to the table for this series. You'll see shades of Cinnamon Peters and Abby Craig throughout the book.


3. What makes Ginger of the West different from other witch cozy mysteries out there today?

There are tons of witch cozy mysteries out there these days, but Jools and I like to think of Ginger of the West as being special for several reasons. The book is a true mystery that will leave readers guessing right up until the end. Also, Ginger takes place on the Oregon Coast -- a place that both Jools and I know very well and love. We're both from Oregon, and have both spent lots of time on the coast. I think that comes through really clearly in the book, and makes it a fantastic summer read. The book is also very much a cozy, with lots and lots of mouthwatering food descriptions!!


4. Will there be more in the series?

Ginger Snaps, the second book in the Witches of Broomfield Bay Mystery series, is set to come out this fall. In total, we’re planning on writing 5 books in the series.


5. Are there recipes included in the book?

Yes! In true cozy fashion, we’re including five recipes in this book straight from Ginger’s cafe. These include marionberry scones, ginger lemon bars, and a delicious recipe for salmon chowder.

Ginger of the West will be available on Amazon this Thursday! Jools and I can't wait to share it with you guys!
Posted by MegMuldoon at 8:24 PM