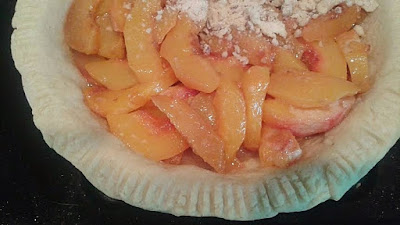 It’s hard not to love everything about this time of year.

The days feel magical somehow – it’s still warm and sunny, but the air feels different. The sun has a slant to it that it didn’t have only a few weeks earlier, and every once and a while, a leaf will turn yellow and drift on down to the ground.

It’s not fall yet, but it’s not summer either. It’s a beautiful in between time: A time to appreciate the end of one season, and get excited about the beginning of another.

Cinnamon Peters, the pie-baking heroine of the Christmas River Cozy Mystery series, likes to celebrate this time of year with a delicious peach maple pecan pie she calls "The Last of Summer Pie." It takes peaches, an end-of-summer staple, and pairs them with the rich fall flavors of pecans, maple syrup, and bourbon. Cinnamon likes to think of this pie as the perfect bridge between seasons.

So without further ado, here’s Cin’s recipe for the perfect September dessert! 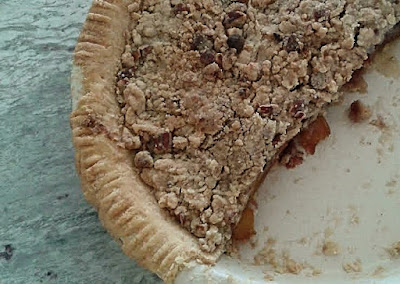 For Pie Crust:
1 store-bought butter pie crust, rolled out into pie pan and pre-baked in oven at 350 degrees for 10 minutes.

1. Roast Peaches: Preheat oven to 375 degrees. Halve and pit peaches, and place on baking pan. Brush tops and bottoms with 1 tbsp of melted butter, and roast in oven for 10 to 15 minutes, until fragrant. Remove and let cool. When cool, peel peaches and slice. (Pre-roasting peaches not only makes it easy to peel them, but also ensures maximum flavor.) Place slices in a bowl.

2. Mix Filling: Toss peaches with cornstarch, flour, cinnamon and salt in a bowl. Meanwhile, in a heavy saucepan on the stove over medium-high heat, combine sugar, maple syrup, bourbon, and water. Stir until sugar dissolves, then allow it to boil. Leave it boiling, without stirring, until the caramel becomes a deep amber color. Once it does, remove from heat, and add butter. Stir until butter is completely melted.

3. Pour caramel sauce over peach mixture, and coat completely. Put mixture into pre-baked pie crust, and place in fridge while you assemble the crumble.

1. Mix together the pecans, flour, sugar, brown sugar and cinnamon. Cut butter into small cubes, and work into mixture until it becomes pebbly.

2. Generously spread crumble out across top of peach pie. Bake pie for 15 minutes at 400 degrees. Then bring temperature down to 350, and bake for another 40 to 45 minutes. Check often and if the crust is darkening too quickly, cover it with foil. Pie is ready when the top has turned a deep golden color and the house smells like a peach tree!

Let cool for at least 2 and a half hours.

Thanks for stopping by, and I hope you enjoy this recipe! Magic in Christmas River, the seventh book in the Christmas Cozy Mystery series, will be out in October, so stay tuned!

Posted by MegMuldoon at 1:15 PM