Happy Halloween! Yesterday, I participated in Kathi Daley's Halloween Spooktacular where I shared a short scary story featuring characters from The Christmas River Cozy Mystery Series. I wanted to be sure to post that story here also in case you missed the event! So here it is, just in time for Halloween weekend. Enjoy! 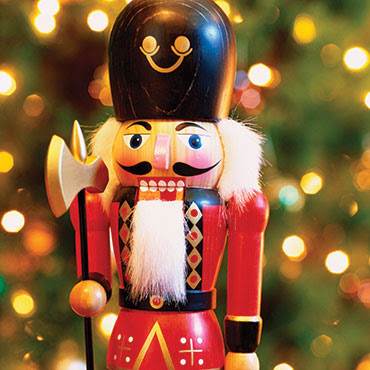 Kara Billings didn’t remember much about her grandfather except that the old man was ornery and hardly said much except to complain about his sore hip.
But there was one thing that Kara’s grandfather said that stuck with her years after he passed away.
“In life, there are some doors you have to kick your way through, girly,” he’d said to her once. “And then there are others that are closed for a reason. Leave those be.”
At the time, Kara didn’t understand what her grandpa meant.
But now as she stood in the corner of her ornament store on a dark and dreary night in November, taking in fearful breaths and trying not to scream, Kara began to understand.

It had all started a week earlier at the estate sale.
Old Hattie Blaylock, Christmas River’s resident witch, had died of natural causes at her home just after Halloween. The old woman was a recluse and though nobody knew for sure whether she really was a witch, some locals in the quaint mountain town breathed easier when they heard that she had passed on.
One morning shortly after Hattie’s death, Kara was driving to work and saw a cardboard sign.
“HUGE ESTATE SALE! GREAT DEALS!”
Kara, the owner of Christmas River’s most popular ornament store, was never one to pass up a sale. She hooked a fast left, following the cardboard signs all the way to Hattie’s old house, where she found a surprisingly vast array of antique furniture scattered across the dead lawn.

Kara had been studying the 3-foot-tall nutcracker standing on a sideboard when she heard a voice.
“Oh, I see you found him.”
Kara looked back to see a stylish woman standing there with a clipboard.
“Beautiful, isn’t he? A classic example of German craftsmanship. It’s an original Gaunerei doll, you know.”
“Oh, really?” Kara said, not knowing what that was, but pretending like she did.
“Yes, absolutely. Hattie’s older brother brought it back from Germany after World War II. It’s a true antique.”
With each passing moment, Kara felt herself more and more transfixed by the wooden sculpture.
The nutcracker was dressed as a soldier and was elaborately painted in rich shades of maroon and gold. Though the passing years had left a layer of dirt on him, his teeth were still white and prominent, and his eyes were--
Kara knew it sounded silly. But she could have sworn that she saw a sadness in the nutcracker’s eyes.
“How much for him?”
The woman consulted her clipboard.
“$345.”
Kara felt her eyes bulge.
“Normally, that is,” the woman said with a slick smile. “But since you’re the first one at the sale today, I can give you a deal. How about $100?”
The next thing Kara knew, she was writing a check and gently placing the nutcracker in the trunk of her car.

“Don’t you just love him?”
Kara had positioned the nutcracker to stand at the entrance of her ornament shop and greet the customers. Already, people had started commenting about how great he looked.
“I wish I had one just like him for my pie shop,” Cinnamon said, gazing at the doll. “He could sure help with all those hazelnuts I have to crack for my pies.”
“The sales lady let me have him for a steal,” Kara said, taking a sip of her Pumpkin Maple Latte. “I think it must have been on account of all that witchy business. But personally, I don’t really believe that Hattie was a witch. I mean, not really.”
“Me neither,” Cinnamon said. “Hattie was just an elderly woman who kept to herself. I don’t believe the stories that people told about her.”
Cinnamon glanced at the time.
She wished she could have stayed longer, but she needed to get back to her pie shop. Locals and tourists alike would be wanting pumpkin pecan, cranberry cinnamon, and chocolate hazelnut pies for their November tables.
“I better get going,” Cinnamon said. “See you later, Kara?”
Cinnamon noticed that her best friend was staring at the nutcracker with a faraway look in her eyes.
“Kara?”
“Oh, sorry,” she said, shaking her head. “Yeah, see ya, Cin.”
Kara suddenly felt a little strange.

That night, Kara was carving a wooden dove ornament in the back room of her store when she thought she heard a strange noise coming from the front door.
At first, she thought it was just the wind. It had been awfully windy in Christmas River this November.
But then, she heard the strange noise again.
It sounded like a young boy crying.
Kara got up and walked into the display room. The lights from the many Christmas trees flickered, casting shadows on the walls.
She flipped on the lightswitch and scanned the room, looking for what could have made that strange sound.
Her eyes eventually fell on the nutcracker.
That was odd, she thought.
She could have sworn that she’d set the doll on the right side of the entryway. Not the left side. But there he was, standing where she hadn’t left him.
Kara shook her head.
She hadn’t had dinner yet and hunger was starting to make her see things.
She went over, moved the nutcracker to the right side of the door where he belonged, and then headed into the back room.
She reckoned it was time to go home and get some food and--
Kara stopped dead in her tracks as a loud wail echoed through the store.

Her blood turned to ice.

The same thing happened several nights in a row. And each time that Kara tried to find the source of the crying, the sound all but vanished. It left her feeling frightened and desperate.
She thought about getting rid of the nutcracker, but then remembered the money she’d forked over for it.
She couldn’t just throw an original Gaunerei nutcracker away like that.
By the third night, she’d had enough. She placed a few phone calls and the next day, a woman named Evelda Madison arrived at the ornament shop. Evelda was dressed in a long black lace gown and looked exactly how Kara imagined a real psychic would look.
When Evelda was done investigating the shop, the psychic told Kara of her findings.
“You are right about the nutcracker, Kara. It really is haunted.”
Kara felt a little nauseous as the psychic confirmed her worst fears.
“There’s a spirit of a young boy attached to the nutcracker,” Evelda continued. “The doll was his before it was taken away and sold during the war -- just like the estate saleswoman told you. The witch kept the boy’s spirit trapped in this doll, and that’s why he cries.”
Now Kara knew why the nutcracker’s eyes were so sad.
“How do we help him?” Kara asked.
The psychic handed her a small bottle of soil.
“Sprinkle this around him and say ‘you are free’ three times in a row tonight at midnight. This will allow the boy to cross over into the light.”
Kara took the soil, nodded thanks, and then handed the psychic a check for her hourly rate.

Kara waited that night in the shop, listening to the sound of the wind howl outside.
The rain had turned to ice and the trees had frozen right in place. Every time the wind blew, their branches groaned and creaked like a sinking ship.
When midnight rolled around, Kara went over to the nutcracker, sprinkled the soil around, and whispered “you are free” three times in a row.
When she finished, she felt the heavy energy of the shop lift.
She let out a sigh of relief, kneeling for a moment to look at the nutcracker. His mouth was hanging open, the way it always was, ready to crack a nut.
“You’re free now, little boy,” she said, putting a hand up to its cheek. “Go your way in peace--”
The nutcracker’s jaw sprang up suddenly without warning.
Then, the lights in the shop went out.
Kara screamed and ran out into the storm.

Cinnamon placed the nutcracker in the display window of her shop. She stepped back to get a better look at him.
No. That wasn’t quite right either.
She’d been having trouble finding just the right place for the old nutcracker.
Maybe by the door, she thought.
She picked him up, and as she did, something floated down to the floor.
It was a golden, weathered sticker that said “Gaunerei, Made in Germany.”
She flipped the nutcracker upside down and was about to re-apply the sticker to its base when she noticed something else.
The sticker had been covering up another one.
The original sticker.
“Holiday Crafts Inc., Product of California, 2008.”
Cinnamon smiled sadly as she put two and two together.
Poor Kara had gotten swindled at the estate sale. Maybe that was why she’d given Cinnamon the nutcracker out of the blue that morning, saying she wanted nothing more to do with it. Kara probably didn’t want it after finding out it was a fake.
But it didn’t matter to Cinnamon whether the nutcracker was an original or not. He had character and spunk and would be a useful addition to her pie shop. She had noticed that his jaw was a little warped and could snap up without warning, but other than that, he did a good job cracking nuts.
Cinnamon set the nutcracker down by the front door and tossed the golden sticker in the trashcan. She backed away to get a good look at it.
Yes, she thought. Now that was the perfect place for him.
She dusted her hands off on her apron and headed back to the kitchen to finish making a batch of chocolate hazelnut pies. 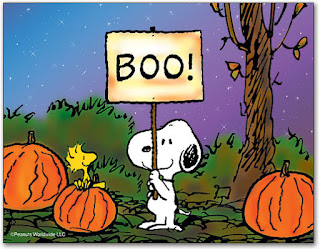 Happy Halloween, Readers!!
Posted by MegMuldoon at 10:54 AM